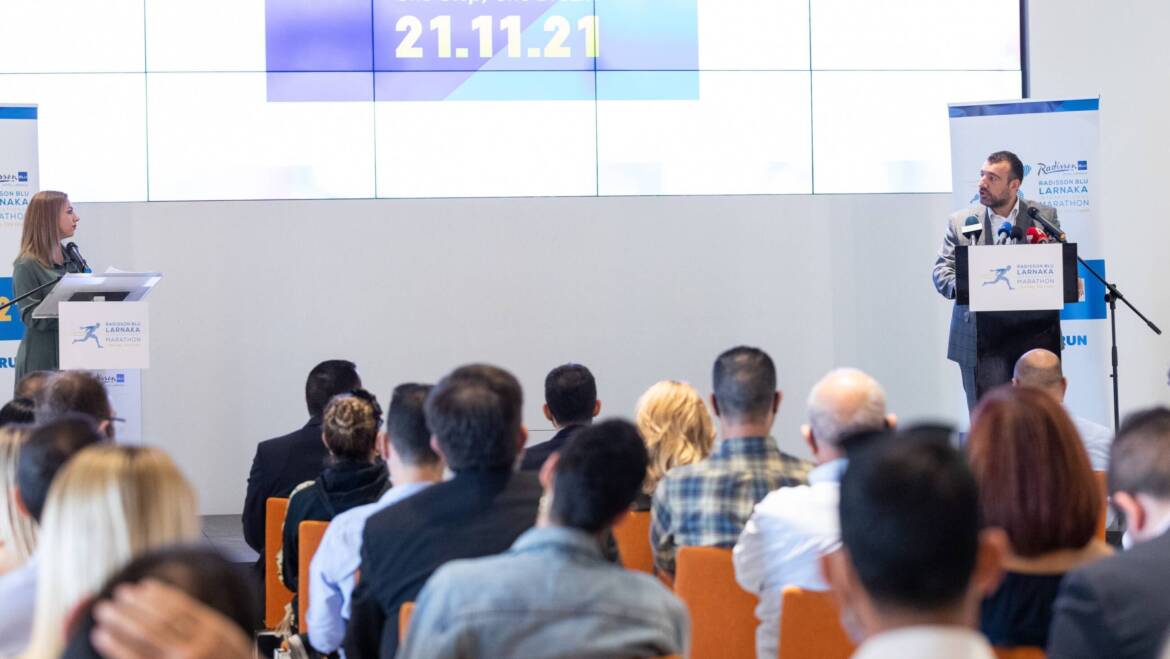 Everything is ready for the return of the biggest celebration of sport in the city of Zenon, the 4th Radisson Blu LarnakaInternational Marathon, which will be held in full compliance with the Ministry of Health’s protocol for a safe conduct of the event, with the health of participants and spectators being the first concern.

At the press conference held on Friday, October 29 at the premises of the name sponsor Radisson Blu Hotel, all the details of the routes were presented, alongside the sponsors that support the event.

The aim of the organising committee of the 4th Radisson Blu LarnakaInternational Marathon is, on the one hand, for the runners to experience again the great celebration of sport and culture, keeping Larnakaon the tourist map and, on the other hand, to continue the rich charity work. This year the event supports the Ronald McDonald House of Charities Cyprus, the Christina Apostolou Foundation, the Karaiskakeio Foundation, and the Special Olympics Cyprus.

The Mayor of Larnaca, Andreas Vyras, stated: “It is a celebration for the whole city, a celebration enjoyed by tens of thousands of people. It is the great celebration of the city and this year it symbolises a return to normality, a return to life. We would also like to give a message: Life does not stop, people continue to live and we are not going to stop.”

The executive director of the Radisson Blu LarnakaInternational Marathon, Kostas Daltas, stated: “We are heading towards the 4th Radisson Blu LarnakaInternational Marathon with special conditions and protocols based on the instructions of the Ministry of Health. We are 100% harmonized with the Ministry of Health, and implemented directions used in dozens of major events around the world. This year, we are running new routes where runners enjoy the natural beauty of the city. We also have a new route the McDonalds Teens Race 2,5 KM, which is open to runners from 12 – 17 years old who participate for free thanks to the generous support of McDonalds.

We are expecting tens of thousands of athletes and visitors from abroad and Cyprus on November 21 for an event that offers a lot to the Municipality of Larnaca, to the whole of Cyprus, to the economy of the country and individually to each participant. As our slogan states, one step, one dream. More on November 21!”. Mr. Daltas announced with great pleasure that this year’s Sponsor & Telecom Partner of the Radisson Blu LarnakaInternational Marathon is Cyta with the fastest mobile network in Europe.

The CEO of SunnySeeker hotels and name sponsor of the Radisson Blu LarnakaInternational Marathon, Marios Polyviou said: “We are supporting the event and will continue to do so. In fact, this year we have renewed our partnership for two more years. We thank the other sponsors, the Municipality of Larnakaand wish good luck to all those who will take part in the great celebration.”

The first Green Marathon
The Radisson Blu LarnakaInternational Marathon is the first green marathon in Cyprus, with a “green protocol” followed faithfully every year. This year, a corresponding green programme has been prepared under the auspices and with the cooperation of the Commissioner for the Environment, Clelia Vassiliou.

“I wish all the runners every success, to welcome them from abroad and to welcome our flamingos as well, as we do every such season in the Larnakasalt lakes in conditions of care for both people and wildlife and our environment”, said the Commissioner of the Environment in her greeting. In fact, in the framework of the Green Marathon, the race will be driven by Unicars’ electric cars Volkswagen ID.3 and ID.4.

The new 2.5 km McDonald’s Teens Race route for charity
This year, the Radisson Blu LarnakaInternational Marathon is a pioneer, and in collaboration with McDonald’s – which gave their name to the new route – they support the charity work of the Ronald McDonald House of Charities Cyprus, a global charity organization that this year completes the construction and operation of the first Ronald McDonald House, which will host free of charge families whose children are hospitalized in any medical institution in the capital. The Ronald McDonald House® is located near Macarius Hospital and has 12 family rooms.

Andrie Penda, Organizational Leader of the Foundation stated: “We are here today to thank both the organisers of the Radisson Blu LarnakaInternational Marathon and the McDonald’s restaurants for their joint decision to include us in this year’s race programme of the event. I would like to urge the public to support the Ronald McDonald House Charities team that will be running in the corporate 5km race. RMHC for short. At the same time, I invite individuals and companies to contribute through the GivenGain platform in support of #TEAMRMHC. Nothing is more important than the health of our children. For a mother to be able to tame the darkness and turn it into light, to find hope where all seems futile, to accept the trials but not compromise, supportive care is needed. We need you in order to be able to provide that supportive care they need and continue to keep families together, united.” For her part, McDonald’s Head of CSR, Katerina Andreou, extended an invitation of participation in order to extend the chain of giving as big as possible!

The Executive Director of Petrolina Holdings Georgia Lefkariti, in her address, noted that Petrolina, in the context of its continuous social contribution to the Cypriot society, is pleased to support the Radisson Blu LarnakaInternational Marathon and will continue to support the institution, which is a great chain of solidarity.

Olympians and World Champions at the 4th Radisson Blu LarnakaInternational Marathon
On November 21 we will have the opportunity to see in person for another year great sporting personalities, Olympic and world champions brought to Larnakaby Stoiximan. The Olympic champion Spyros Gianniotis will be present, among many others. It is with great pleasure that Stoiximan is once again supporting the event, said the Country Manager of Stoiximan in Cyprus, Angelos Hontoulidis.

All routes are designed to offer refuelling stations so that everyone can enjoy their participation in the race to the fullest.

Race Protocol
According to the race protocol of the Ministry of Health, persons over 12 years of age are eligible to participate and are required to present a Safepass with one of three options: a negative PCR or Rapit Test with a maximum validity of 72 hours, a certificate of vaccination with both doses and a certificate of recovery from Covid-19 with a validity of 6 months from the date of sampling of the initial positive diagnosis

The Sponsors of the 4th Radisson Blu LarnakaInternational Marathon.