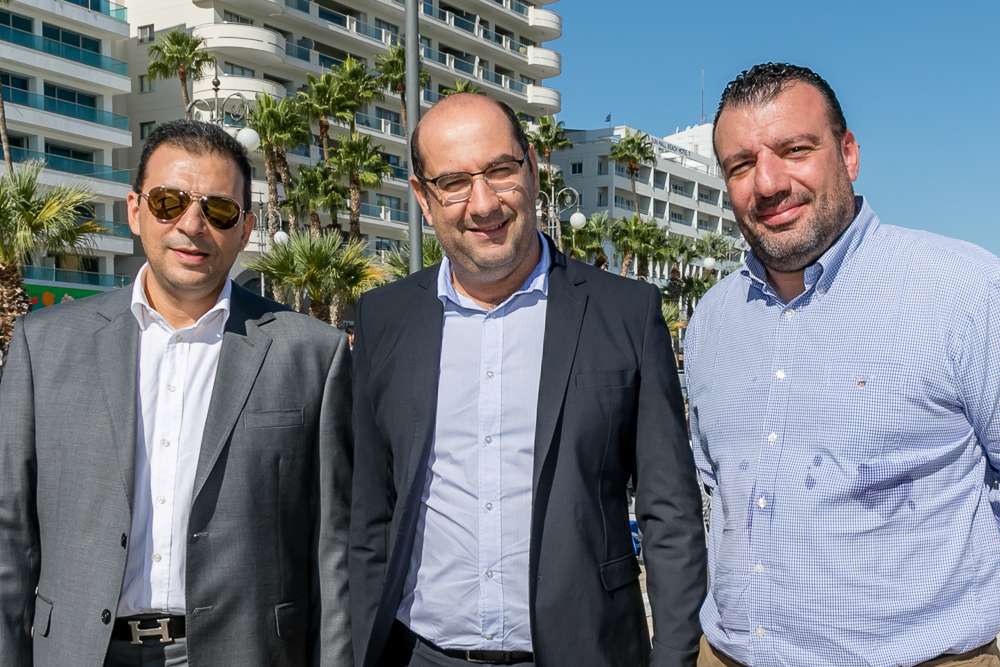 On Thursday, November 9, the city of Larnaca dressed in blue colors has welcomed the opening ceremony of the 1st Radisson Blu Larnaka International Marathon.

The global community has embraced this event and more than twenty countries will participate from the first year. This is the first Green Marathon of Cyprus, friendly to the environment.

Before the announcement of the start of the Marathon, Mr. Marios Polyviou, the representative and Nominated Sponsor of the International Larnaka Marathon, Radisson Blu and CEO of SunnySeeker Hotels has stated: “We are very happy to be associated with Larnaka Marathon and we will be there for many years next to it, as we will be next to any important event being held here.”

Then the final signal was given by the honorable Mayor of Larnaca, Mr. Andreas Vyra, who among others has stated: “A few days remain for the realization of the biggest sporting event in our city, the 1st Radisson Blu Larnaka International Marathon, a sporting event with multifaceted and multidimensional purposes.

Mr. Vaggelis Papapostolou, Technical Adviser of the 1st Radisson Blu International Marathon said: “It is very important in a city like Larnaca to make a Marathon because it upgrades the city and it contributes financially, touristically and culturally. Millions of people travel around the world along with their families on marathon occasions. ”

Multidimensional, in addition to sports and healthy lifestyle is looking forward to supporting and collaborating with Foundations and Organized Groups that provide charitable work such as the Karaiskakis Foundation, the Hope for Children Organization, Movember Movement and Special Olympics Cyprus.

Today, sport is the biggest and most important social phenomenon of our time, in which millions of people regardless race, religion and social background are engaged every day.

As Municipality of Larnaca, acknowledging the importance of sport and its multidimensional form, we invest in it, placing it high on our priorities. We therefore invite the participants to become social, honoring the great celebration of sport.

Larnaca is constantly on the rise to become a World Sports Center.
This path, this rising course of sport, emerges many essential things that are so important and can transform Larnaca into a world reference point.

Based on the glory of the Marathon, the Olympic Spirit, its principles and ideals, we are today opening the 1st Radisson Blu Larnaka International Marathon.

Initiated by Mr. Vyra, the torch was lit in a symbolic traditional torch ceremonial at Kimonos Square in Phinikoudes and  Mrs. Eva Kyprianou dance school has performed for the audience.

The torch was delivered to the child who lit the altar by Mr. Giorgos Mesimertsis, a great sport personality. He was born in Edessa, where there is a street with his name and a bust that adorns the city, while the Association of Veterans Athletes of Edessa athletes bears his name.

He is a champion of Greece with many national records, a Balkan winner, and has participated in three European Championships and three Olympic Games, in Rome, Mexico and Tokyo.

Mr. Giorgos Mesimertsis, who is vice-president of Pericles Dimitriou and is living in Cyprus for many years.

The Organising Committee of the 1st Radisson Blu Larnaka International Marathon would also like to thank its Ambassadors:

Andri Avraam, Andri Sialou, Chrysa Gutenoudis and of course Pericles Iakovakis, who will be next Sunday with us.

On November 19th, the Olympic gold winner and World Champion, Lefteris Petrounias, will also be there coming along with the Stoiximan Running Team.

The 1st Radisson Blu Larnaka International Marathon would particularly like to thank for their support: the Ministry of Justice and Public Order, Education and Culture, Transport, Commerce, Environment and Volunteer Commissioners, the Cyprus Police, the Civil Defense, the CMO, the CTO and the EAC.

Essential for the organization and conduct of the 1st Radisson Blu Larnaka International Marathon was of course the support of its sponsors:

At the same time, the 1st Radisson Blu Larnaka International Marathon would like to thank the communications sponsors: TVONE which will also broadcast the Marathon online on Sunday, November 19, but also Citizens, SigmaLive, City, Supersport FM and Mix FM Radio.

The following Sunday, Larnaca welcomes the biggest sporting event of the year.

We are waiting for you all!