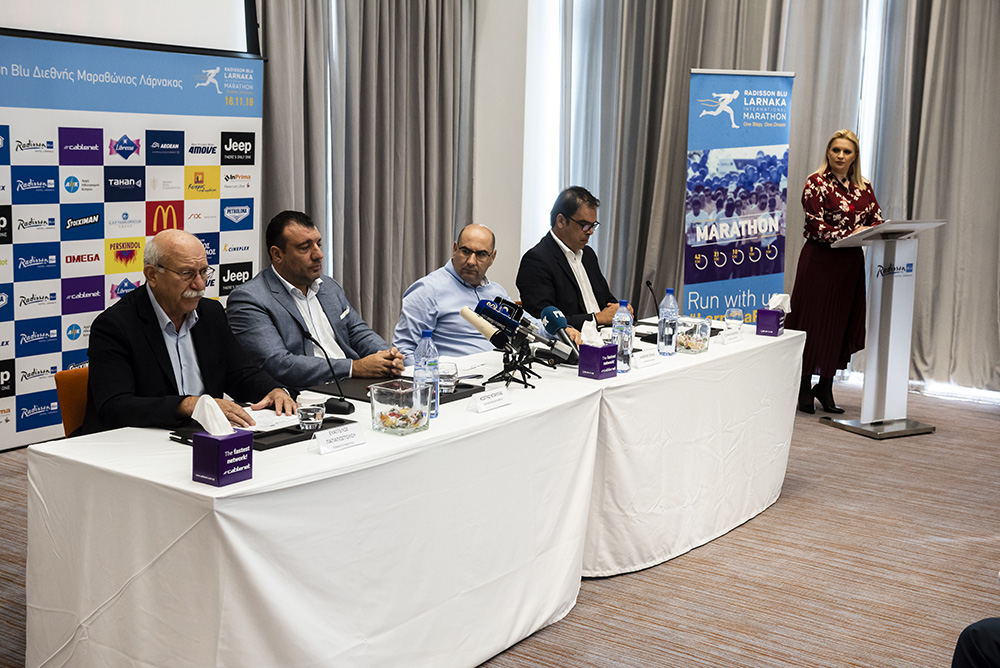 In the presence of a large crowd and all supporting parties of the big celebration, the Organisational Committee of the Radisson Blu Larnaka International Marathon presented the second event that will take place in the city of Zenon in November 18, 2018.

Radisson Blu Larnaka International Marathon’s goal this year is to continue in the success of last year’s Event and even offer more to both participants and viewers. Ultimate goal is making the Marathon an unforgettable experience for all participants, promoting the sporting, cultural, environmental and, of course, tourism importance of Larnaca.

Journalist Maniana Kalogeraki was the coordinator and presenter of the press conference, while those attending the panel were: Costas Daltas (Executive Director of the Marathon), Andreas Vyras (Mayor of Larnaka), Sotiris Mavros (Marathon Competition Director) and Evangelos Papapostolou (Technical Advisor to the Marathon).

Chrysa Apostoloumi made an intervention on behalf of the Technical Committee. Christos Kyriakides, Director of Radisson Blu, also welcomed the attendees “As Radisson Blu we are very pleased with the work done by the organisers and by our so far cooperation. That is why we renewed this sponsorship deal for three more years. As it was already announced, for the next three years the event will bear the name Radisson Blu Larnaka International Marathon.”

From Jackson to 12-year-old Glykeria

Larnaka Mayor Andreas Vyras spoke about the importance of the Event for the city “Larnaka emerges as an Athletic Centre of worldwide regard and importance. For all of us this upward course towards sporting means many and important things that are powerful enough to turn our city into a worldwide reference point.”

Costas Daltas, the Executive Director of the second Radisson Blu Larnaka Marathon discussed the aspects of this years’ event after last year’s success and also spoke about the special attendees “the Greek Elite Marathon runner Maria Polizou who will run in Larnaka a week after Athens Classic Marathon , British Caroline Jackson who will run the 100th marathon of her career in Larnaka and lastly 12 year old Glykeria Skarkou, who came third last year in the 5km road race in Athens Classic Marathon who makes her dream of representing Greece in an international race come true” while special reference was made to the “arrival of the flame of Athens Authentic Marathon on November 15” as well as to the charitable aspect of the Marathon which is very important for the Organising Committee.

This year Radisson Blu Larnaka International Marathon is special for one more reason, since it is dedicated in the memory of Giorgos Mesimertsis who passed away this summer. Mesimertsis had won third place in the Balkan race twice in the 800-1500m, while making national record in 5000m in 1968. “His presence in last year’s Marathon was a great honour and the least we could do is to dedicate the race in his memory” Costas Daltas noted.

Arrival of the flame of Athens Authentic Marathon

Sotiris Mavros, Marathon’s Competition Director, gave all the route details and Chrysa Apostoloumi spoke in detail about the arrival of the Flame of Athens Authentic Marathon on November 15 as well as the reception ceremony in Larnaka Airport and the torch relay form Larnaka airport to Phinikoudes where a special ceremony will be held.

Mrs Apostoloumi spoke of the flame arrival and its importance to the Marathon which that adds to its significance and prestige. Evangelos Papapostopoulou, Technical Advisor of the Marathon noted “It is a great honour to be a part of this great team and share my technical knowledge in organising. With all initiatives taken and patience that is needed I believe that Larnaka will become a social, sports and tourist model city.”

On behalf of McDonalds – who have given their name to the kids Marathon- Katerina Andreou spoke of the charitable nature of the particular race: “The intention and nature of this sponsorship is to motivate our children into loving sports thus making them a part of their life. To this end, participation in the McDonald’s Kids Race is free of charge and it’s an opportunity for children aged 4 to 17 to enjoy this sporting event. In order to make it possible for adults of all ages to run with the children and feel like children themselves, for this year they can join the RMHC Fun Race 1k and the net income will be given to Ronald McDonald House Charities Cyprus.”

More than 10.000 participations from 40 countries

It’s also noted that this will be Cyprus’s first Green Marathon. It is held under the auspices of the Commissioner for the Environment and the Commissioner of Volunteering in cooperation with Green Dot and Let’s Do It Cyprus.

A special moment for Radisson Blu Larnaka International Marathon is the arrival of the Flame of the Athens Authentic Marathon with a special torch relay from the airport to Phinikoudes.

Additionally, the winners of the Radisson Blu Larnaka International Marathon will participate in Rhodes Marathon, which in turn will give its presence in Larnaka on November 18 as part of the two Marathons twinning last April.

Routes vary, starting with what is the most basic route, the Marathon Road Race route (42.195 km). The routes that follow are the Half-Marathon road (21.095 km),10km, 5km-Corporate, 5km- individual, McDonald’sTM Kids Race 1km and RMHC Fun Race 1km for adults.

All routes are designed to offer refueling stations, so everyone can enjoy their participation in the race.